When a Snake is in a Residential Area

If you or someone else is bitten by a poisonous snake, call 911 immediately.
If the snake is determined to be poisonous and it is located inside your home or garage, or at the entrance to your home, call the fire department’s non-emergency number at 480-312-8911. Be sure to watch the snake’s movement, as it cannot be relocated if it cannot be found.


Take steps to help ensure your safety with our desert neighbors

Arizona is home to a wide variety of snakes. These animals serve an important and effective role in rodent control. Without such predators, the disease and destruction for which rodents are responsible would increase. Because many homes are built on or near wild land, and with the number of desert parks available for recreational use, reptile encounters are highly likely.

Help keep snakes away from your home with the following tips:

For more information, please contact the Scottsdale Fire Department at 480-312-8000.

"A Field Guide to Amphibians and Reptiles of Maricopa County" is available through the Arizona Game and Fish. Visit www.azgfd.gov 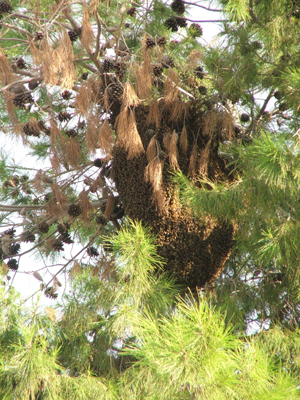 Although they can be dangerous if provoked, bees are a critically important part of our ecosystem because they pollinate so many of the crops we eat.

Swarming is the process by which a new honey bee colony is formed when the queen bee leaves the colony with a large group of worker bees. Swarming is mainly a spring phenomenon, usually within a two- or three-week period depending on the locale, but occasional swarms can happen throughout the producing season.

Africanized bees are characterized by far greater defensiveness than European honey bees. Also, they have been known to pursue a perceived threat for a distance of well over 1640 feet. This aggressively protective behavior has earned them the nickname "killer bees.”

The venom of an Africanized bee is the same as that of a European honey bee, but since the former tends to sting in far greater numbers, the number of deaths from them is naturally greater than from European honey bees. While allergies to the European honey bee may cause death, death and complications from African bee stings are usually not caused from allergies to their venom. People who are stung many times by the African honey bees can exhibit serious side effects such as inflammation of the skin, dizziness, headaches, weakness, edema, nausea, diarrhea, and vomiting. Some cases even progress to affect different body systems by causing increased heart rates, respiratory distress, and even renal failure.

How to escape a killer bee attack: http://www.wikihow.com/Escape-from-Killer-Bees

The City of Scottsdale recommends humane removal of bees which does not result in the destruction of the swarm or hive. Be forewarned that most commercial bee removal services that you call will kill the hive. While that might solve your short-term problem, it could create a long-term problem for our ecosystem.

We keep the community strong