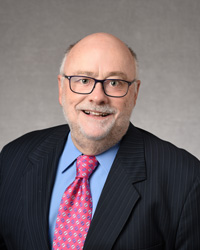 Councilmember Durham began his first term on the Scottsdale City Council in January 2021.

After graduating from Cornell, he attended New York University Law School in New York City, graduating in 1980. During his time in law school, he served as research editor of the Review of Law and Social Change, one of the law school’s journals.

After graduation from New York University, he joined the Mayer Brown law firm in Chicago, an international law firm with offices throughout the United States, Europe, South America, and Asia. Councilmember Durham specialized in tax controversy, representing the firm’s clients in audits, trials, and appeals of local, state, and federal tax cases. During his time at Mayer Brown, he was recognized by Chambers USA as one of the top 25 tax controversy lawyers in the U.S.. Councilmember Durham retired from Mayer Brown in April 2015 and soon thereafter became a full-time resident of the city of Scottsdale.

Councilmember Durham served as treasurer of the Protect Our Preserve political action committee, which was responsible for placing Proposition 420 on the ballot in November 2018. Since moving to Scottsdale, he has served as mock trial coach at a local high school, teaching trial skills, teamwork, and the rules of evidence to high school students.

His wife Martha serves as an Episcopal Deacon at a local church and they have two sons.