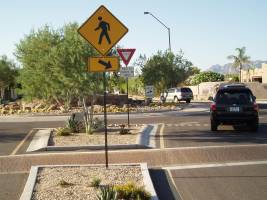 Neighborhoods often have concerns about traffic. It's not only a safety issue, but a quality of life issue too.

Scottsdale’s Transportation Department works with neighborhoods throughout the city to address traffic concerns on a case-by-case basis through its Neighborhood Traffic Management Program (NTMP).

The Speed Awareness phase of NTMP is implemented by the Police and Transportation departments.

This phase focuses on educating drivers and raising awareness throughout the neighborhood about traffic concerns – usually speeding and cut-through traffic.

Some of the strategies used to help educate drivers and raise awareness include: 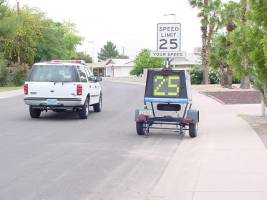 Sometimes, this type of heightened awareness is all it takes for most Scottsdale neighborhoods, but some areas may need the help of the Police Department to monitor and issue citations. 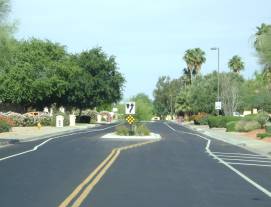 After completing the Speed Awareness phase, if residents still feel their quality of life is impacted by traffic, they can fill out a Neighborhood Traffic Management Interest form. This form must be signed by at least ten different residents along the same street.

Once the form is completed and approved, the request is placed on a list for traffic evaluation. Speed and volume data is collected by the Transportation Department and compared to the city’s approved criteria for traffic calming, provided there is support in the neighborhood.

If the data collected meets the city’s criteria and the street qualifies for possible installation of traffic calming devices, neighborhood support for the project must be established. In most cases, the city pays for the devices.

Traffic calming projects require the support of the surrounding neighborhood to be considered for funding. A public meeting will be held to provide information about the projects to residents of the surrounding area. The public meeting will then be followed by a petition process requiring 70 percent of the residents, within the affected area of the project, to sign in favor of the project. Once these signatures have been received and verified, the project will be presented to the City of Scottsdale Transportation Commission for funding approval. NTMP projects are heard by Scottsdale's Transportation Commission twice each year. See the link to the NTMP policy near the top of this page for additional details.