Construction complete on Fire Station 613 at the southwest corner of Jomax and Hayden roads.  Fire Station 613 is staffed by a six-person crew with a fire engine, tanker and an all-terrain vehicle. The ATV is used for trail rescues in inaccessible areas.

City of Scottsdale identified and purchased the new site to build the permanent station that is more centrally located, allows for better coverage and will reduce response times to emergencies in the northern areas of Scottsdale.  The funds to build this project were approved by the voters in the November 2015 bond election.

On January 13, 2015, the City of Scottsdale was the successful bidder on a parcel of State Land located at the southwest corner of Jomax Road and Hayden Road. A power line easement runs across the parcel, leaving approximately 2.3 acres of usable land south of Jomax Road along the west side of Hayden Road.

In November of 2015 funds to design and build the station were approved by the voters as part of the bond election.

Currently the City of Scottsdale Fire Department has operated out of a ‘temporary’ single-wide trailer for over twenty years that does not meet industry and safety standards for a fire station. The fire station is a modular trailer housing fire station living areas, a covered canopy for the fire apparatus and two con-ex boxes for storage and turn-out gear.

The temporary station is currently located at water booster pump station 42-B just north of the intersection of Pima Road and Jomax Road making access and visibility limited. The ingress/egress drive is an approximately a quarter mile access road that leads to Pima Road which adds to response times in the area. Land was purchased in 2015 at Hayden Road and Jomax Road with the intent to build a permanent fire station to improve response times in that service delivery area. 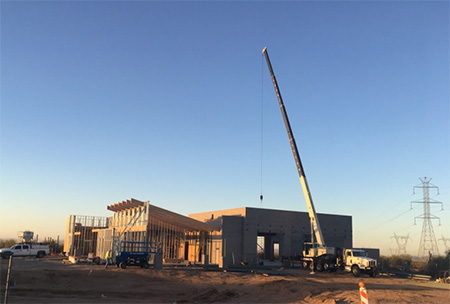