Due to concrete deterioration found during ongoing inspection work on the Drinkwater Bridge and Underpass, the underpass is now closed. Additionally, access over the top of the overpass, which is on Civic Center Mall, will be closed to all activity. Please use caution when traveling in the area and adhere to all barricades and restrictions.

Construction work began in December 2018 and repairs are now nearing the final phase of construction. Both the underpass and restricted areas of Civic Center and expected to reopen during the Fall of 2019.

The final slab on the bridge deck was poured in mid-July.  Work will now focus on the instillation of drainage, waterproofing and restoration of the surface above the bridge.  Work on the underpass continues with the final finish on the walls and ceiling and the instillation of a new tunnel lighting system.

The City has been doing everything it can to improve the visitor experience to the Civic Center Area while construction work is taking place.  Pedestrian walkways were built to connect the two sides of Civic Center, Signage was placed in the area to let pedestrians know how to get around and the LOVE sculpture was relocated.

The City Council approved the final construction contract  for $1.21 million at the July 1 council meeting.  In total, the project has cost the city about $7.17 million over the three phases.

The Drinkwater Bridge was constructed in the mid 1980’s creating the Civic Center Mall area which has evolved as the City’s civic and arts headquarters. The structure supports open space including grass and trees, the LOVE statue and the fountains which were installed as part of the bridge project.

In early 2014 staff was notified that there were sections of failing concrete located under the structure and as a result contracted with Caruso Turley Scott (CTS) to investigate the cause of the failing concrete. The findings revealed several areas of the structure that are failing due to water intrusion through the deck, due to leaking within the fountain structure, irrigation of landscaping and an insufficient drainage system, and waterproofing membrane that has exceeded its service life.

On June 12, 2018, the City Council authorized funding for repair work and hired Haydon Building Corporation to begin an investigative effort to determine the extent of the immediate repairs necessary. During the investigation, large areas of loose concrete were discovered along the west side retaining wall, in addition to the deterioration of the concrete columns within the center of the structure. Haydon Building Corporation was authorized by staff to remove all loose concrete on the retaining wall and columns, however, during their work the two columns were deemed too unstable for any further investigative effort.

On October 16, 2018 the City Council approved $6.626 million to repair the overpass.  The first phase of will include securing the structure to repair existing damage and prevent future damage. A second phase of improvements will design and construct a waterproofing and drainage system for the bridge that will support the future Civic Center improvements identified in the recently approved master plan update.

Why is the bridge and portions of Civic Center closed?

There is a great deal of concrete deterioration on the overpass that has made the structure unsafe. Crews were working to repair the failing concrete when they discovered the problems were more extensive than expected causing the emergency closure. There is limited pedestrian access available on the south side of the overpass.

When will the area reopen?

Construction work to build a new supporting wall will begin in December of 2018 and is scheduled to be complete sometime during the fall of 2019.

Are all of the businesses in the area open?

Yes, all of the buildings on or around Civic Center area are open for business. There are parking garages on both sides of Drinkwater Blvd.

How will this closure affect events scheduled at the mall in the coming months?

Scottsdale Arts, the City and event produces are working to determine the best course of action on a case by case basis. For questions about Civic Center events contact Scottsdale Center for the Performing Arts at Info@ScottsdaleArts.org or 480-499-8587.

Why are a number of plants in the Civic Center area dying or being removed?

One of the major causes of the concrete deterioration was water. We can no longer water the plants that are on the compromised bridge deck.

Where is the LOVE sculpture and the public art pieces that were on the overpass? 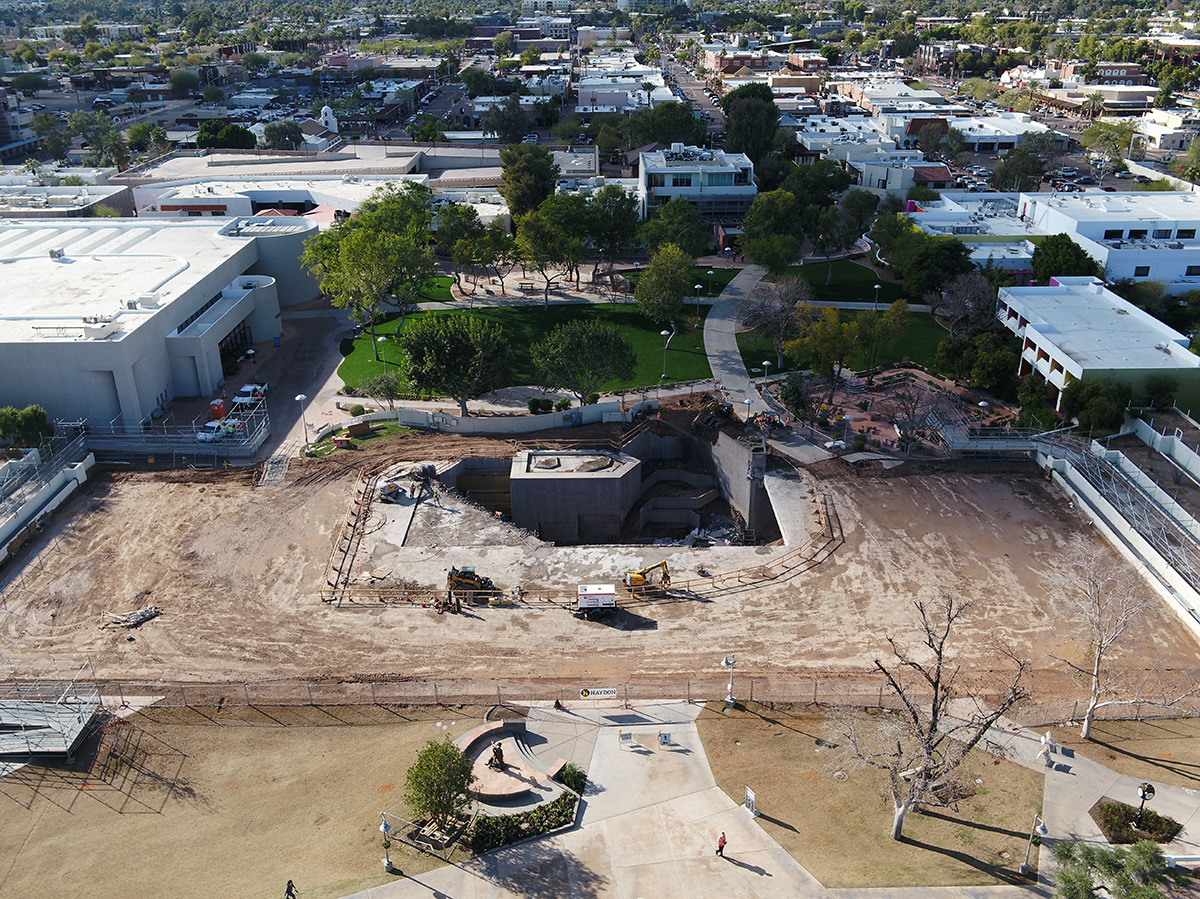 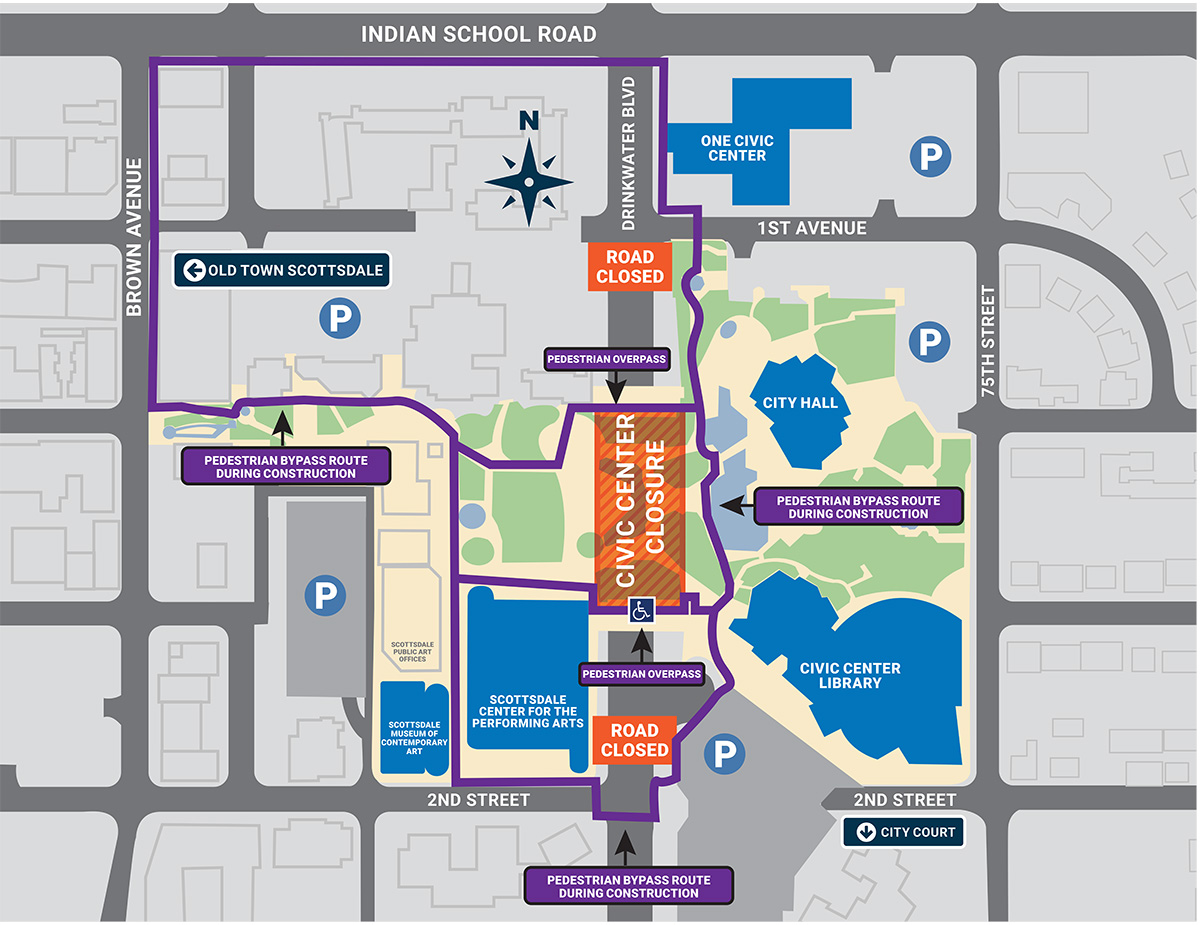 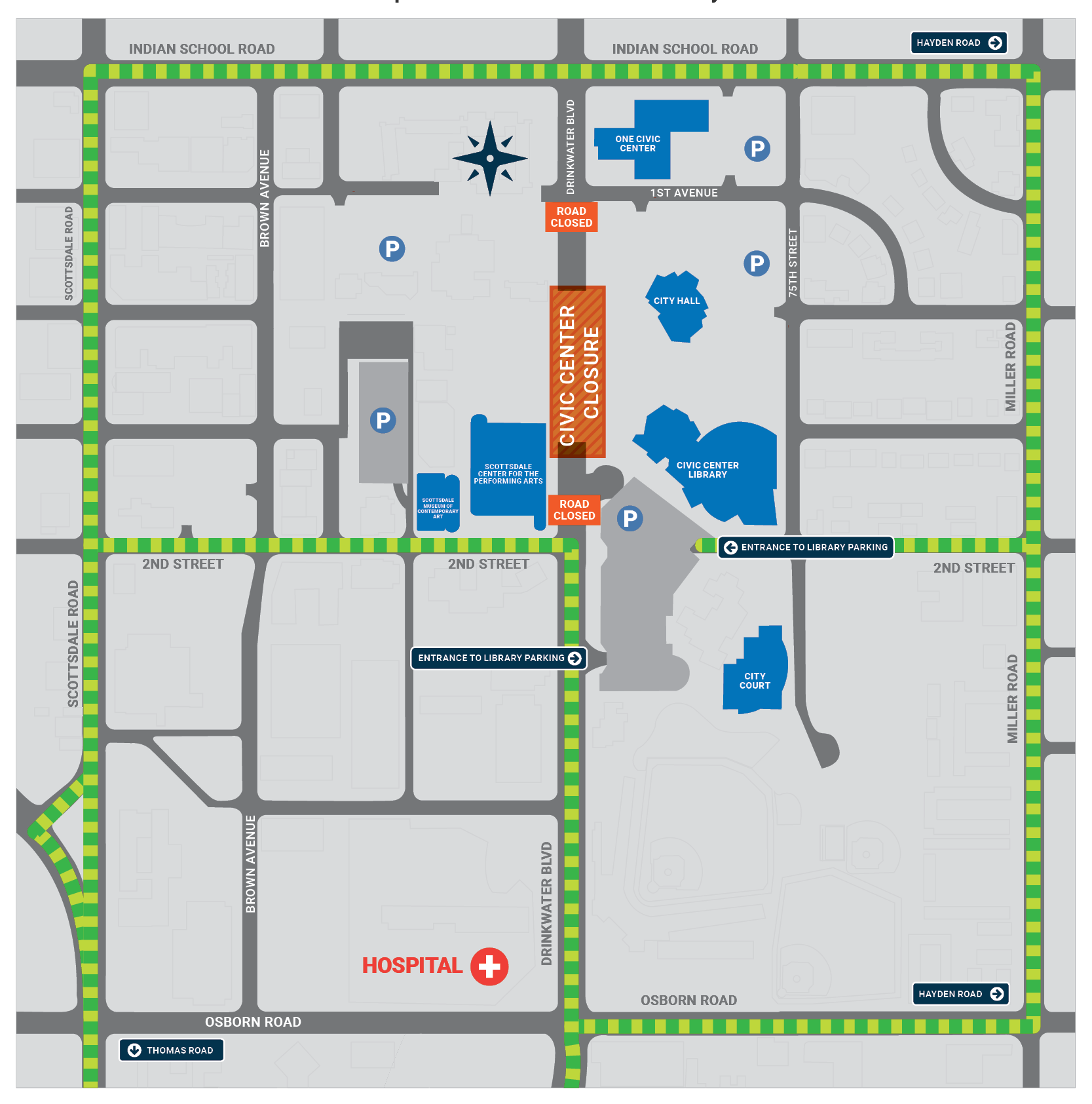